Weekend of January 28th, I woke up with an itch and found myself on the road to my favorite fishing spot in Cavite. It was past 8:00am when I arrive. Thinking that I was a bit late, I was just hoping that the day would be less lousy. After I parked, I wasted no time and rigged one rod for some live bait skipping my usual routine of casting artificial lures for the first hour or two. My target bait was the promising, becoming a favorite feathered river gar (‘kansusuwit’). In a few minutes, I reeled in one. I immediately tossed it back to the water for some 10 meters and as it splash and thrash in the water to get rid itself from the hook, it was like whaaaam! In an instant, I got myself this: 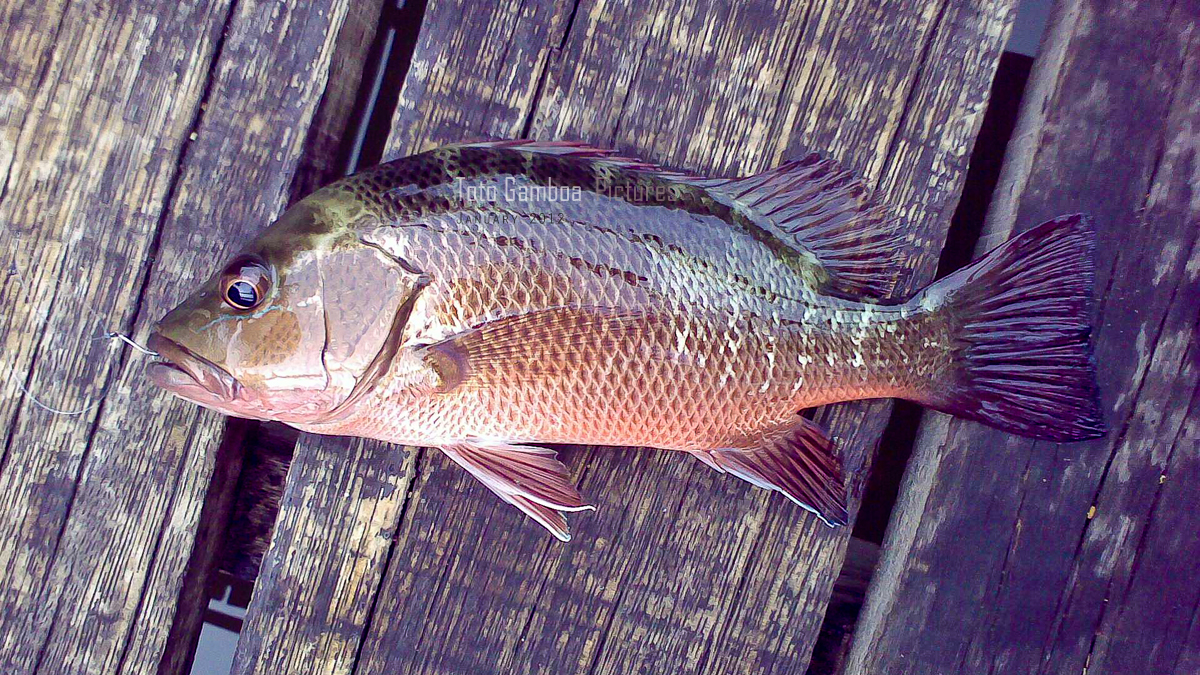 I got myself a perfectly sized Pargo or the Mangrove Jack. Officially called a Mangrove Red Snapper (Lutjanus argentimaculatus). As excitement engulfed my senses, I reached to remove the hook when I got careless. It was able to snap the tip of my thumb and blood just oozed for like 5 minutes. I realized then why it was called a ‘snapper’. It was really painful but was quite happy with what I landed. My first ever Pargo.

Then got myself another lively kansusuwit and as it landed back to the water, another strike from something big. This time though it got away. Then no strikes for the next hour or so.

I decided to change rig and opted for some dough bait to try if some tilapias would bite. Then I got another bite. This time I got this: 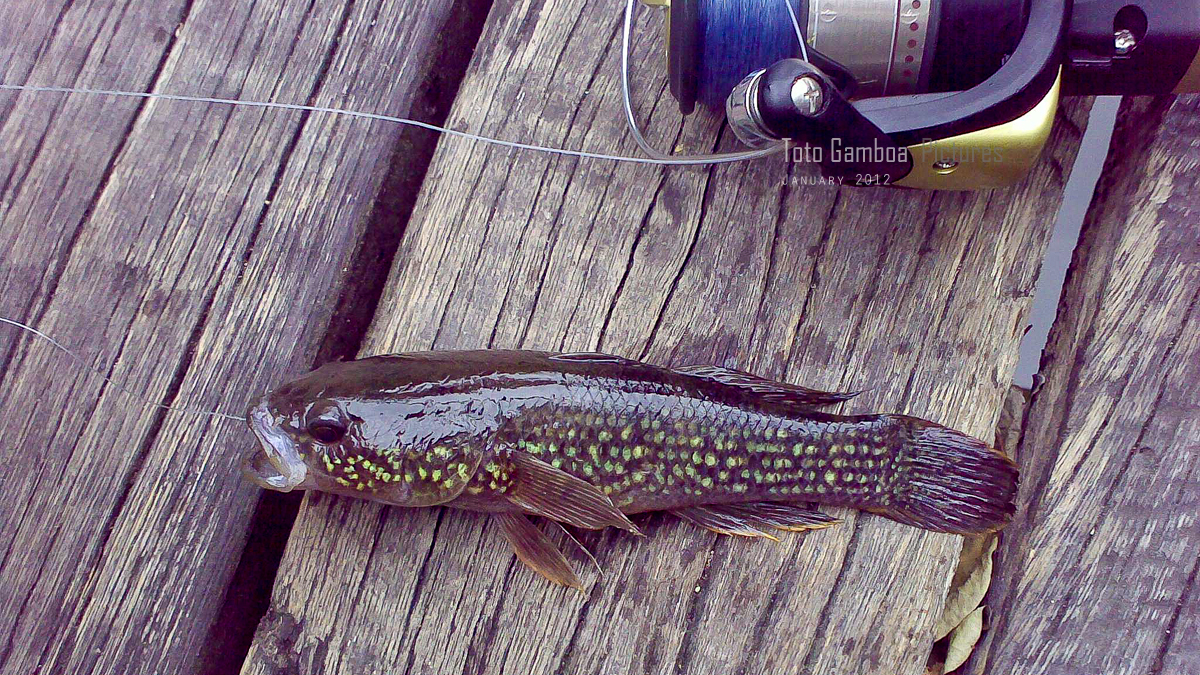 This is some biggest Biya (Tank Goby, Glossogobius giuris) I have ever seen and caught.

For the next couple of hours, there was no sign that my day would be bountiful so I was just there keeping myself busy with some sandwich and some ice cold soda.

Past lunch time, I decided to switch to live bait once again and got myself a kansusuwit. I tossed it back to the water and after some minutes, I got a huge strike but I wasn’t able to set the hook. As I retrieve to cast my bait farther, I got another strike, then a long pull. I moved to set the hook but it got away. However, all that was left of my bait was the head of the river gar. Something hungry got the other half of the fish. I tossed back the half bait and got another strike. I was able to set the hook properly and as I reel in, the fish jumped out of the water and showed itself to me. This is what I caught: 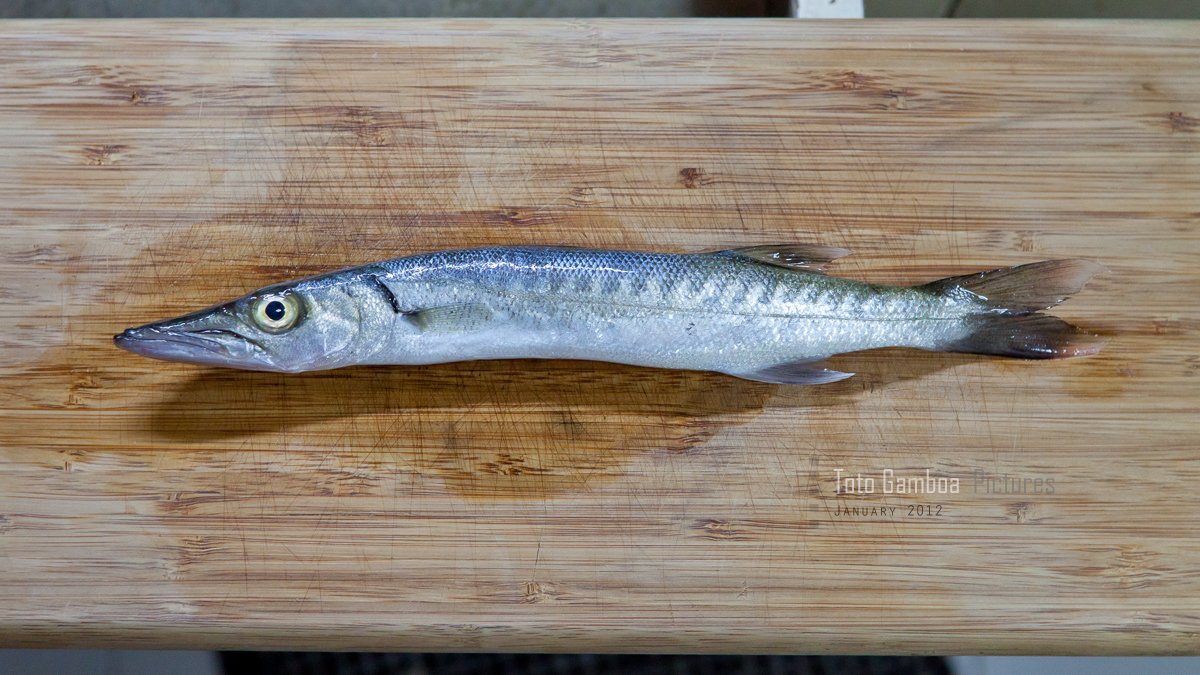 I got myself a Juvenile Great Barracuda (Sphyraena barracuda). I wasn’t able to properly shot some decent photo right after I landed this unexpected predator but shot this after I got home. Few more hours of casting live baits but gotten zero strikes.

It was getting late in the afternoon when I decided to have my mobile parked nearer to where I was so I decided to just leave my rod unattended. As I got back, the rod was violently bending and shaking as I have forgotten to loosen the drag a bit. But before I could get to the rod, something snapped. As I retrieve, all I got was a freshly snapped branch of the mangrove tree, around half of an inch in diameter, with the leading hook, a bit straightened and embedded on the bark while the trailing hook gone. It must have been some kind of a monster to do something like that to a size 2 hook tied to a 30 pound test line. After the incident, it was uneventful until I called it a day.

I went home a happy angler! 🙂